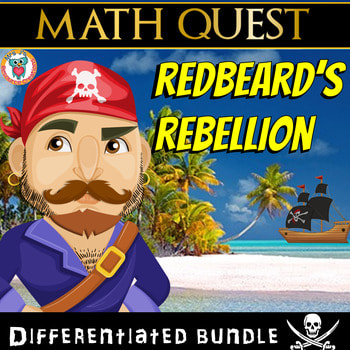 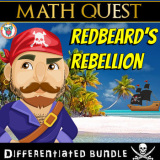 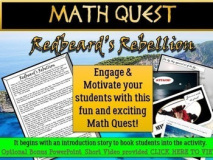 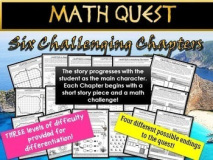 Send your students on an epic Math Quest with this exciting pirate story “Redbeard’s Rebellion”. It covers a mix of math skills, making it an excellent activity for enrichment, practice and review. With six exciting chapters to work through, students can end up with one of four possible endings.

NEW - Distance Learning Update: I've added a Word Document within the folder that contains a Google Doc link to share this resource with your students via Google Classroom or Drive. Parts of the pages are editable so that your students can complete without having to print the pages. Please note, you will need to make a copy of the Google Slides to your drive before you can edit.

This is an ideal math activity for enrichment, early finishers, sub tub or to just add a bit of extra fun to math review time.


Preparation & Set-Up
You will need to print, photocopy and have the video ready for viewing to complete this activity. The video hook is for (optional) viewing before starting the paper part of this task. The math component of this activity is on paper, with each chapter presenting a part of the story to read and a math task/challenge or puzzle to 'progress' through the story. At the end of the story, students will be given choices, which leads to one of four alternative endings for them.


Thank you and enjoy!